An extensive share of information on social media, Tweeter and Facebook announced the death of Jo Paterno on Saturday 1/21/12.  It all started when Onward State sent a tweet to confirm the death of Paterno and posted it on their official website. 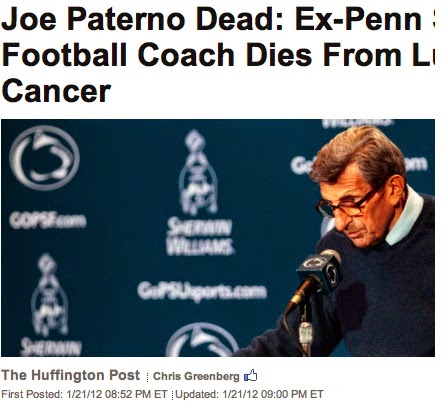 Onward State’s managing Editor James Devon apologize and says” On behalf of everyone at Onward State, I would like to apologize for our organization’s inaccurate reporting last night. More than anything else, we value our readers’ trust, and the sick feeling in my stomach is a constant reminder that last night, we lost a great deal of it.”  In addition to that he posted a message on Onward State official Facebook  (https://www.facebook.com/OnwardState/posts/10150599666855663) “Never, in a million years, would have thought that Onward State would be cited by the national media, and today, I sincerely wish it never had been. To all those who read and passed along our reports, I sincerely apologize for misleading you. To the Penn State community and to the Paterno family most of all, I could not be more sorry for the emotional anguish I am sure we caused. There are no excuses for what we did. We all make mistakes, but it’s impossible to brush off one of this magnitude. Right now, we deserve all of the criticism headed our way.”  Other apologize was made by Mark Swanson, managing editor of CBSSports.com and other news  organizations
Although, an apologize was made from each organization, they have violated the following   SPJ code of ethics: 1.  Verify information before releasing it. Use original sources whenever possible 2. Never deliberately distort facts or context” 3. Minimize Arm. 3. Seek truth and report it 4. Be accountable and transparent because other media did not cited Onward State as their original source  (spj.org).  As a result of these violations, they caused discomfort to the Paterno’s family, .the news organizations jeopardized their credibility, and the managing director lose his job.
References
Onnward State. What  Happened last Night. Retrieved on 10/18/14 http://onwardstate.com/2012/01/22/what-happened-last-night/
McCathy. M. USA Today.  Media Dead Wrong to Reapeat False report of Paterno’s death. Retrieved from http://content.usatoday.com/communities/gameon/post/2012/01/media-outlets-dead-wrong-to-jump-the-gun-on-paternos-death-joe-paterno-poynter-cbssportscom/1#.VEJdTI0vsXw
Facebook. OnwardState official page. Retrieved on 10/18/14 from https://www.facebook.com/OnwardState/posts/10150599666855663
Ponyter Website retrieved on 10/18/14 from http://www.poynter.org/latest-news/mediawire/160270/how-false-reports-of-joe-paternos-death-were-spread-and-debunked/
Society of professional Journalists’: SPJ Code of Ethics. Retrieved from http://www.spj.org/ethicscode.asp

Posted by atlantiquenetwork at 6:35 AM